there are some things i love more than clothes and shoes

i was only in my apartment for a couple weeks last year when i started looking at the beautiful faces of dogs up for adoption. a month later i was saying good bye to my first dog ever (due to bloat - if you don't know what this is, and you have a dog, please do your research. hours can make a difference, though it unfortunately did not for me). then two weeks later, outwardly protesting but inwardly eager to bravely step back into the scary, wonderful world of pet ownership.

that's when i found him, the cutest, funniest beagle-daschund-hound ever - hamlet, my little snuggler, a dog whose favorite things include stealing toys and burrowing under the covers. he was - still is, if i'm honest - a handful. but i love him, even when he drives me crazy. pets are good practice for kids, i keep telling myself. if that's the case...maybe i want to stick with pets for a little bit longer.

but of course one was not enough. i've had a dream to get a cat since i was six, quickly squashed by my brother being "allergic." fast-forward to may when i was taking hammie to get his nails clipped and saw this beautiful little white kitten at petco. he was the sweetest, most inquisitive little thing. they had named him charmin, and i promptly changed that to othello, though he is mr. kitty, mr. furrypants, mr. man, stinkhead and some other cusswords at times (he has already broken a vase and a light bulb).

and once you have two, hasn't the chaos already reigned for a while? (you know where this is going, don't you, tricky reader.) 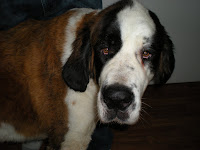 look at that face. LOOK AT IT. how can you say no, knowing the risks? we found out he was five on the way to pick him up. too late, i was and am already head-over-heels as he sleeps on the living room floor, probably getting massive puddles of drool everywhere. my mom is horrified, my grandparents call it a travesty, but i can't get over that face.

don't tell t, but i think it has to be romeo for him. my little loverboy dog.
Posted by Cate at 7:25 AM