i freak over fleas 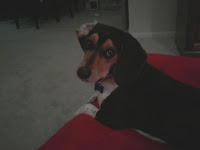 i was rubbing my dog's white belly when i saw it, a tiny black speck, barely noticeable, moving, roaming for something. i squished its little body in between my fingernails and started freaking out - my adorable, lovable puppy had fleas.

i started freaking out, looking up all sorts of home remedies for flea medications until i could get to the vet. i washed all my sheets, sprayed my home with germ-be-gone (just to make myself feel better), and badgered the boy to shell out $60 for three months' of medicine, instead of paying less than half that for the store-bought version, because then we wouldn't know its ingredients if hamlet had an allergic reaction. i lovingly bathed my puppy in dishwashing soap (only the natural version) while whispering to him in my special hamish voice. i wished i could comb over every inch of his precious fur to get every one of those fucking fleas off of him. i found myself angry at those tiny bugs for invading my precious baby.

it was somewhere between this freak-out and the one i had at my mom's where i checked the back door five times to make sure it was locked so hamlet couldn't escape because my mom lives by a very busy road that i realized i was completely obsessed with the possibility of something happening to my dog.

my second thought was fuck. if i'm this worried about my dog, how the hell am i going to be a mom?

i come from a long line of over-bundle-uppers in the winter and extra medication when sick. worrying is as easy as guilt in my family; the two are close friends. how else do i know that i love someone? i tease them and i worry about them - the tried-and-true test of love. i see the horrible scenarios in my mind over and over, every little thing that could go wrong, every awful event that could happen. i freak out over fleas. how did i babysit as a preteen? why the hell did those stupid parents trust me with their children? i'm going to be that mother who hooks a webcam up to her baby's crib and uses a child leash when in public and calls the pediatrician over every red mark. i'm so messed up, i'm worrying about my tendency to be overly worried. how do parents let this stuff go?

i have a feeling it's a more "you learn to live with it" concept. which sucks almost as much as the worrying to me.
Posted by Cate at 1:29 PM